The mandatory US regulations are the federal standards CFR 1632 and CFR 1633 previously described in Part I.

Some of the US building codes and some of the local jurisdictions require full-scale fire testing which are in addition to the federal requirements. The additional tests are summarized below.

This is a full scale mattress test that is mandated by some of the building codes for certain unsprinklered occupancies.

The actual test procedure is substantially the same as that described in California Technical Bulletin 129 (See item #6.)

When the building code specifies ASTM E 1590, they set a maximum heat release value of 100 kW which is considerably less than the 200 kW allowed by federal mattress standard CFR 1633. 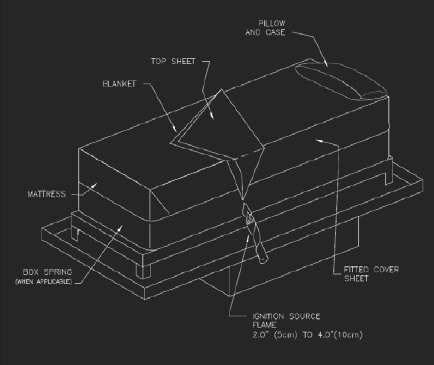 This test is mandatory for certain occupancies that are regulated by the Boston Fire Department.

The configuration of the test is quite different from most other full scale mattress tests.

The pass / fail criteria are much more detailed than CFR 1633.

Products which pass CFR 1633 might fail this Boston test. The usual failure during the Boston test is related to mattress weight loss. 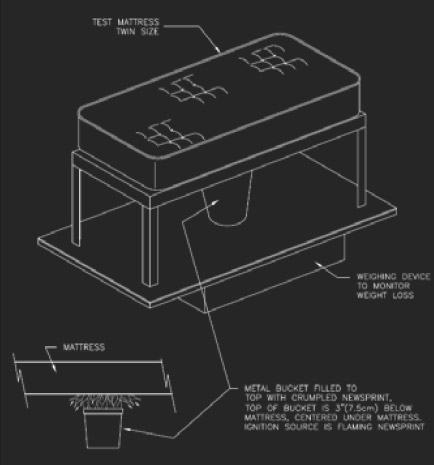 This is a full scale fire test which is cited for penal institutions.

The ignition source is a bucket of burning paper placed underneath the mattress.

The pass / fail criteria are primarily related to weight loss rather than heat release value.

The intent of this procedure is to determine whether or not the fire penetrates through to the surface of the mattress.

The mattress is ignited with a barbeque type burner where the flames impinge on the side of the mattress.

There are some major differences between this test and 1633.

This is a full scale mattress test that is mandated by some of the building codes for certain unsprinklered occupancies.

The actual test procedure is substantially the same as that described in California Technical Bulletin 129. (See item #4.)

This also includes the maximum heat release of 100 kW versus the 200 kW maximum permitted by CFR 1633. Also, the reporting requirement of NFPA 267 encompasses more categories than the Technical Bulletin 129 test. 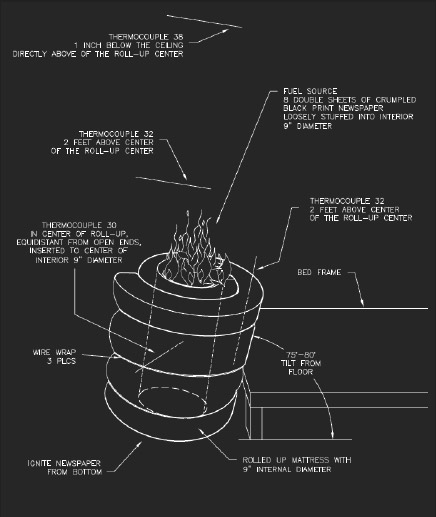 The Michigan Roll Up Test first appeared in the early 1980s. It seems to have been a "word of mouth" test without documentation.

SGS Govmark has determined that the key report values are weight loss and peak heat release.